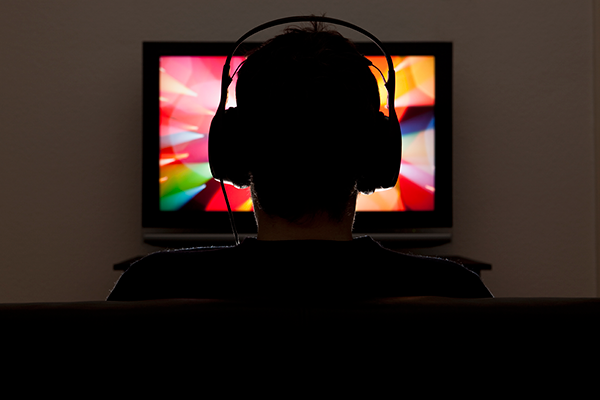 As a medium, radio can help drive brand awareness, consideration, search and store traffic. Radio can also improve the value of an ad campaign that includes other media.

A recent webinar by Nielsen revealed that radio can improve the value of an ad campaign by increasing reach. During the “Reveal the Value of Radio” webinar, it illustrated how radio can significantly improve the reach of a broadcast TV advertising campaign.

Radio does well as a standalone medium to drive brand awareness. Previous studies have shown that radio can also improve the effectiveness of broadcast TV when a portion of the ad budget is allocated to radio. Improving the effectiveness also increases the success of the ad campaign. Radio is a heavy hitter when it comes to reaching the masses. Overall, radio reaches 92% of U.S. adults each week. Based on a target audience of adults 18-49, the Nielsen webinar detailed that 52.8% of these adults are spending time listening to radio daily while 47.2% of adults watch TV. This means there is a higher chance of these adults hearing an add rather than seeing it. Additionally, radio improves the reach of a TV campaign and also increases the memorability of a TV advertisement. TV ads alone have a memorability of 40% while radio + TV boosts ad recall to 54% when paired together.

Using a blinded sports advertising campaign as an example, the webinar touched on different scenarios and the implications of shifting advertising dollars of a $1.3MM budget from TV to radio. In the original plan, 97% of the dollars were budgeted for TV, which gave the client about 68% reach among A18-49. The graph below shows increments of 10% budget shifts to radio from TV, which will increase the net reach as opposed to not shifting dollars at all. There is an optimal shift (or sweet spot) that occurs at the 30% level, which gives the most net reach of about 74% (based on this budget). Note: It doesn’t cost more money to obtain this optimal reach; it’s just about knowing how to shift your advertising dollars the right way between radio and TV. 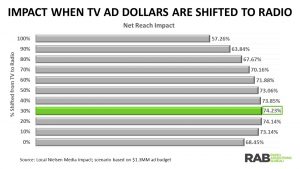 Another scenario took into consideration the possibility of budget cuts – an all-too true reality – by looking at the same $1.3MM budget with $50K allocated to radio and the remainder in TV. If the budget were to be cut by 3%, careful consideration should be placed at removing it from TV, thereby maintaining the 68% campaign reach. If the 3% is cut from radio – the reach diminishes by about 6%, giving the advertising campaign a 62% reach among A18-49. Even in this scenario, less money does not equate to lower reach.

Radio not only delivers reach, it improves reach in a media-mixed campaign. Radio delivers value.

One thought on “Radio Delivers Value”