Fridays are my favorite day. Not just because it’s the end of the workweek and the start of the weekend, but because I know that every Friday is a chance to listen to brand-new music. Hearing the latest music has always been a passion of mine, starting from my childhood days of keeping a cassette tape in my stereo, ready to (illegally) record any new songs that came on the radio.

However, that’s not to say that music discovery is important to everyone. My company, Edison Research, recently released data from our annual Infinite Dial® study, which revealed that 24% of Americans age 12 and older say it is “very important” to learn about and stay up to date with music. This strong interest in music discovery is highest among younger Americans, with 35% of those who are age 12-34 saying it is “very important,” and lowest among Americans age 55+ (10%). However, this does not mean you have to be young to place a high value on discovering music. In fact, more than half of these “new-music seekers” are age 35 and older. 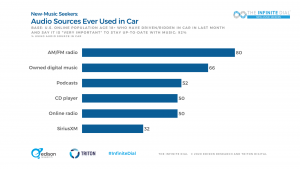 Music listening is also often done through the many online audio services. The ability to create and share playlists, along with the strong image of helping you discover new music, are likely the driving forces behind the use of online audio services. Forty-nine percent of new-music seekers state they have used Spotify in the last month. 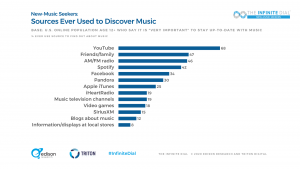 But just because someone doesn’t believe keeping up to date with music is very important doesn’t mean they aren’t still discovering it. When we looked at music discovery source used most often among the 33% who say it is “not at all” important to stay up to date with music, we found that AM/FM radio takes 35% of the pie. This group, who we have labeled as “Satisfied Listeners,” are content with the music library they already have and are much more likely to turn to the radio when they are interested in hearing the latest songs. This, perhaps, seems to demonstrate a unique function that AM/FM radio serves. While it is an important resource, among others, for the latest songs, it is still the main resource for the latest hits.

Not all new music will become hits, so radio is still an important way for music listeners to weed out which songs are worth listening to or at least to know what others are listening to.

Are you a new-music seeker or a satisfied listener?